A favorable fintech ecosystem, a regulator that promotes innovation, specific incentives and financial freedom are some of the country's strengths.

"We see in Fintech an opportunity for Uruguay," said the executive director of Uruguay XXI, Jaime Miller, at the opening of the Montevideo Fintech Forum on October 29. On that day, the first instance of a series of online activities that make up the 2020-2021 edition was held in the cycle format of this outstanding event in the sector.

In an exchange with the main actors of the innovation ecosystem, key tools and policies for business support in finance and technology were presented. The Executive Director of Uruguay XXI highlighted the differential advantages of Uruguay as a fintech hub for the region and the world.

In addition to having a regulatory body that promotes innovation - the Central Bank of Uruguay (BCU) - the country stands out for its solid, stable and modern financial system. Proof of this are some of the innovations deployed by BCU to underpin the efficiency of the system, such as the Multi-Acquisition and Open Banking.

In addition to its stability and ease of doing business, Uruguay stands out for its financial freedom, being a country that respects the guidelines recommended by the OECD.

The country also offers a series of specific incentives for companies in the sector to use Uruguay as a regional hub. It is worth noting the tax benefits for the software sector, such as income tax exemption and the attractive free zone regime 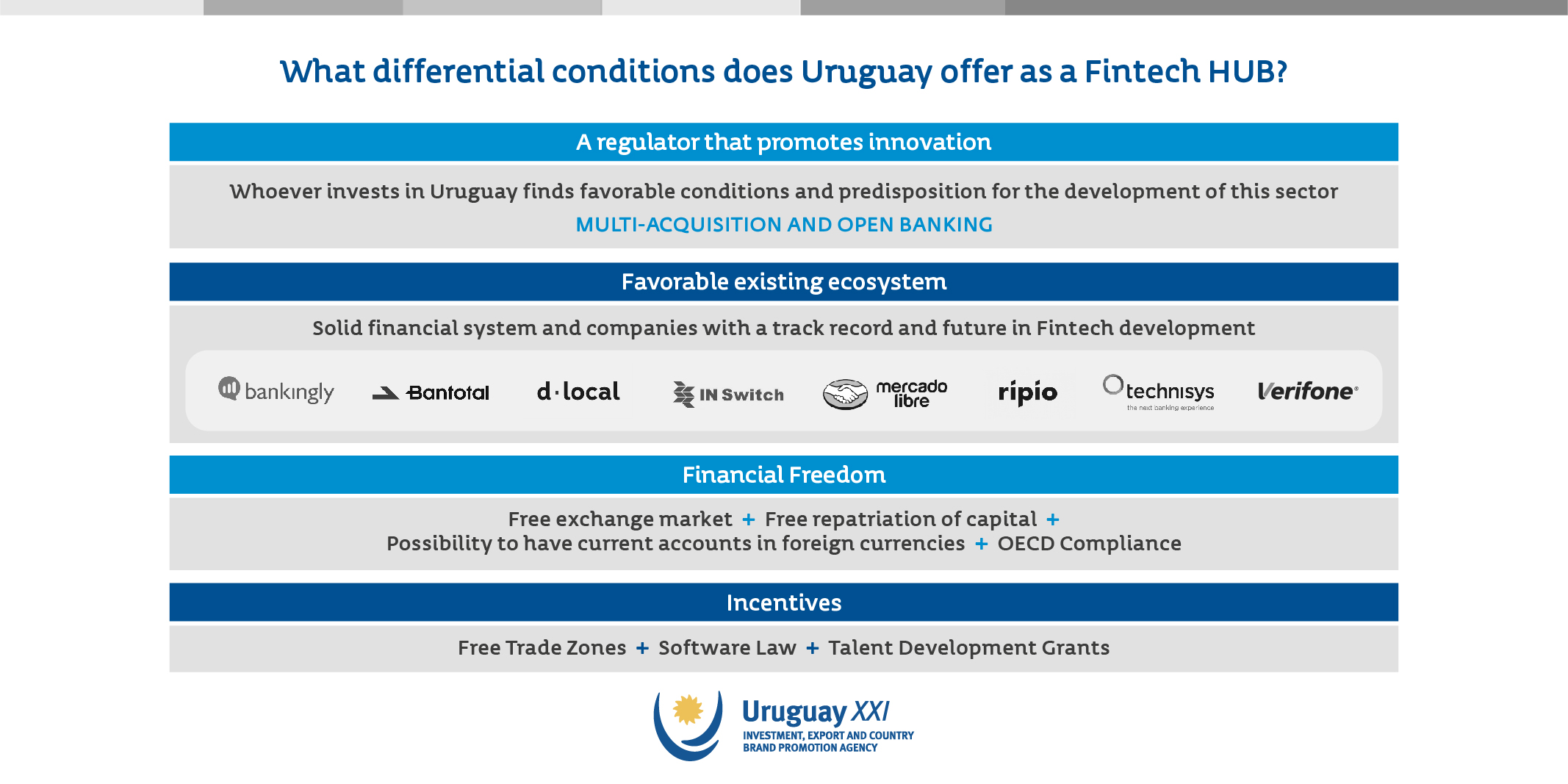 This sum of elements has favored the consolidation of a thriving ecosystem and has made Uruguay an efficient location for international companies of global projection. "We have several success stories of companies developing multiple fintech solutions from Uruguay to the world," said Miller.

Of special interest is the explosive growth of Uruguayan dLocal fintech, which became the country's first unicorn after surpassing the valuation of USD 1 billion. Firms such as Bantotal, which has its core banking solution operating in several markets including Asia, Bakingly, which provides ebanking solutions to different international banks, and the also Uruguayan InSiwtch, account for a vibrant, innovative and world market-oriented ecosystem.

In addition to its state-of-the-art technological infrastructure, which has enabled companies to continue their operations in the context of the global health crisis, Uruguay stands out for its vast availability of qualified and multilingual talent. In this sense, the country has made a strong commitment to the training of professionals through programs that subsidize the costs of customized training such as Finishing Schools, and also seeks to position itself as an attractive destination for foreign talent.

"Uruguay has gained recognition as a very good place to live. We want to use that advantage to attract technology talent to work in companies installed in the country," concluded Miller.

Uruguay receives transformational investment in the timber...
Government added Uruguay Audiovisual Program to the country's...
For eighth year in a row Uruguay is the best in Latin America...