With an opening speech by the Minister of Industry, Omar Paganini, and the Ambassador of Uruguay to the United Arab Emirates, Álvaro Ceriani, the country began its activities at the universal exposition.

Uruguay officially opened its pavilion at Expo Dubai on October 5. The event was attended by the Uruguayan Minister of Industry, Energy and Mining, Omar Paganini, Uruguay's commissioner at Expo Dubai, Sebastián Risso -executive director of the Uruguay XXI investment and export promotion agency-, Uruguay's deputy commissioner at the exhibition and ambassador to the United Arab Emirates, Álvaro Ceriani, and the pavilion's general manager, Barbara El Dbeissy.

Representing the United Arab Emirates were the Minister of Culture and Youth and general curator of the UAE pavilion, Noura Al Kaabi, and the Undersecretary of Economy, Foreign Trade and Industry, Abdullah Ahmed Al Saleh. Also in attendance were members of the Uruguayan Embassy in the United Arab Emirates and Uruguayan residents in Dubai, as well as ambassadors and general curators of pavilions and Latin American countries.

Expo Dubai is the first universal exhibition to take place in the Middle East, Africa and South Asia region. It will be open until March 31 under the main theme "Let's connect our minds, build the future" and will feature more than 200 participants, including countries, multilateral organizations, companies and educational institutions.

Uruguay will be presented there as a business center in South America and a reference in agro-intelligent production, technologies and clean energies. Under the slogan "Test Uruguay", it will invite attendees to learn first-hand about its essentially innovative character, with qualified talent and open doors for those who choose it as a place to live, work and invest.

Aligned with the contents of the universal exposition, Uruguay will show why it is a sustainable country. It will showcase its achievements in terms of freedom, social equality, quality of life, clean energy generation and its technological and educational progress with the implementation of Plan Ceibal -One Laptop per Child-.

"Expo Dubai is impressive. It has a futuristic look at how we are going to move, how our energy is going to be. The word sustainability is seen everywhere and in that sense it leaves us with the message that we are on a very good path as a country. We came to show what we have to offer to the world, not only our products, but also the opportunities we have to invest. The Uruguayan offer is up to expectations", said Sebastian Risso from Dubai.

During the inauguration of the pavilion, the Minister of Industry and the Uruguayan Ambassador were in charge of offering words of welcome. "We are happy to be here. We want to open up to the world, to get closer to other realities that we respect and with which we want to relate better", declared Paganini and added that for his visit he developed a very intense agenda of meetings with Emirati authorities, with the purpose of finding cooperation opportunities both at the trade and investment level, at the technological and energy levels.

"We detected a very great interest in strengthening the exchange of Arab countries with South America and in that context Uruguay presents itself as a very good opportunity, because of its legal framework, its effort to favor investments and because we are complementary from the commercial point of view, we produce agro-industries and they need food. So there is a very good opportunity to strengthen trade and also to receive investments from here", he added.

Ambassador Ceriani stressed that "Uruguay is a safe country, with political, economic and social stability, and with a strong democracy. It is a very good destination for investments and is ready to strengthen commercial ties with the world. It is also an environmentally friendly country, which has almost reached 100% renewable energy generation".

Visitors to Uruguay's pavilion during Expo Dubai will find a free-flow space with an exhibition of premium export products such as olive oil, honey, merino wool and leather garments and accessories, among others. In its wine bar, the country will offer tastings of its wines, recognized worldwide for their character and superior quality.

Visitors will also be able to appreciate the traditional Uruguayan amethysts, stones originating in the north of the country, of intense violet color, which can range from a few kilograms to more than 10 tons. In the soccer corner they will appreciate the display of historical objects of Uruguay, including a replica of Obdulio Varela's jersey and the World Cups won by the country. Through a giant screen with augmented reality, visitors will be able to interact with players of the Uruguayan national soccer team and try to convert a penalty kick. 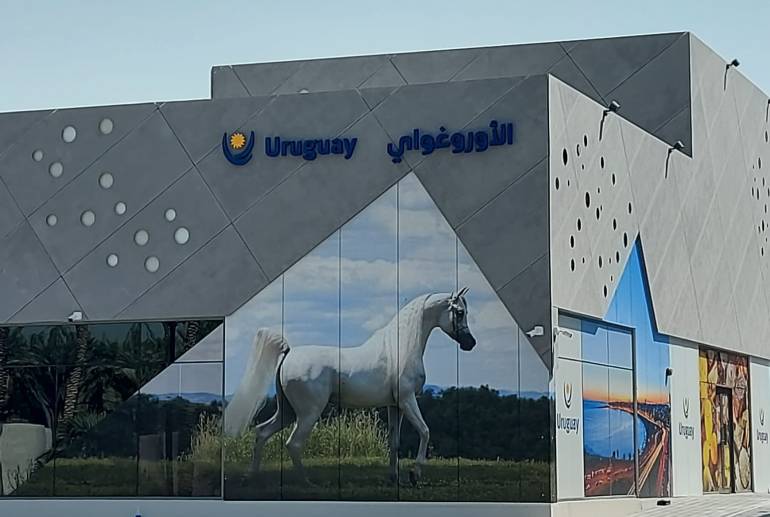 The pavilion also reflects Uruguay's outstanding equestrian sector. With natural resources and climatic conditions that make it a suitable location for the development of this activity, Uruguay is ranked 24th in the world in terms of equine head of horses and eighth in the international ranking of countries with regard to the stock of thoroughbred racehorses (SPC).

Finally, on the top floor the pavilion offers offices and meeting rooms available for Uruguayan businessmen and entrepreneurs who need to coordinate their business activities.

Expo Dubai will continue until March 31, 2022. Uruguay, along with 191 other countries, is participating in this commercial and cultural event, one of the most important in the world. In this context, the country will also be present at the Global Business Forum Latin America, which will take place from 23 to 24 March 2022.