THE URUGUAYAN SOCCER TEAM WILL SHOWCASE THE EXCELLENCE OF URUGUAYAN ULTRA-FINE WOOL AT THE WORLD CUP IN QATAR.

Authorities presented "Lana Celeste a Qatar", an initiative that will dress the players of the Uruguayan National Soccer Team with high quality national Merino wool suits.

Just like the Uruguayan national soccer team, Uruguayan wool competes with the best in the world, which is why it was decided that the players will wear suits made with top-quality Uruguayan Merino wool during the World Cup in Qatar 2022.

The "Lana Celeste a Catar" project, which was presented at the Uruguayan Football Association, represents an excellent opportunity to promote the country as an exporter of differentiated and high-value natural products, as well as a reference in fashion and sustainable design.

The purpose of "Lana Celeste a Catar" is to promote Uruguayan wool through the image of the Uruguayan Soccer Team and to be recognized as a natural, renewable, recyclable, sustainably produced product, with certified processes and products, environmentally friendly and animal welfare friendly.

The use of this product in Qatar - a state with a very warm climate - will demonstrate that it offers optimum thermal insulation compared to other natural and synthetic fibers, so it can be used both in summer and winter.

The superfine Merino wools, of less than 18 microns for these suits, allow the production of Super 130's fabrics, light, 260 grams per meter, which adapt to the climatic conditions of Qatar, with excellent comfort on the skin and in line with international fashion trends. 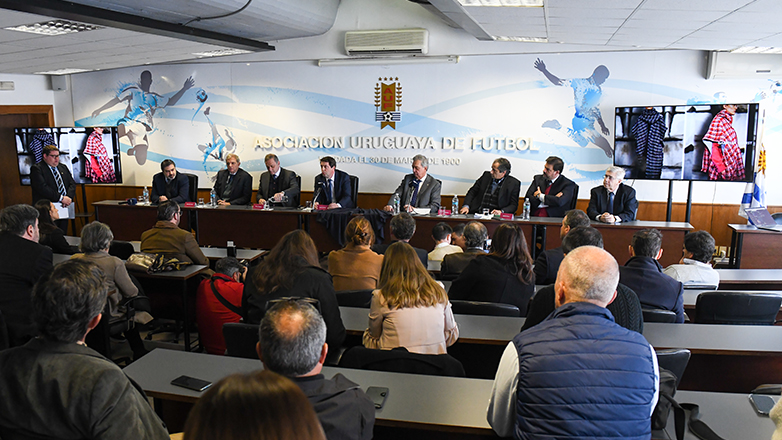 During the presentation of the project, the president of AUF, Ignacio Alonso, said that "the national team will arrive at the World Cup strengthened and united with the ultra-fine wools with which the best fabrics in the world are produced".

"We had to put something more of ourselves so that the national team would really be an ambassador of the country in the world. This project is a great innovation in this sense and allows us to add to our delegation in Qatar all the effort of the productive country, with its society, its workers, its producers, its industry, its designers and the added value of Uruguayan agricultural production," he said.

The rural producer, Alberto Bozzo, promoter of the initiative, valued the opportunity of having the Uruguayan Football Team to promote Uruguayan wool at a global level.

"We have a national team made up of internationally known players and two great figures of enormous trajectory such as Luis Suárez and Edinson Cavani, who are also from the interior, from Salto, the cradle of wool", he celebrated.

Regarding the suits that the players will wear, Bozzo explained that they will be made with 100% merino wool, ultra-fine, soft and cool, which favors their use in Qatar's warm climate. "We obtained 300 meters of the superfine fabric, which had been made up of wool from five merino producers in Uruguay, which had been washed, combed and exported to Italy, and which reached the AUF at a very low cost thanks to all the institutions that support this initiative," he said.

The Minister of Livestock, Fernando Mattos, also underscored the important role of inter-institutional cooperation in bringing the project to fruition. "This initiative is the merit of all the institutions that have been working for many decades to improve Uruguayan wool production, combining the initiative of producers with science and research, and with the support of the national wool industry in the search for a higher quality product," he said.

Meanwhile, the Secretary of the Presidency, Alvaro Delgado expressed that the initiative not only means giving support, but also the testimony of something that has a lot to do with history, but also with the future of Uruguay. "We have three ministers, the AUF, the Secretariat of Sports, the INIA, the Uruguayan Wool Secretariat, the topist industry, producers and the investment and export promotion institute, Uruguay XXI, which has been tenaciously working on the country's image, on showing what makes us different in the world", he added.

"We will have to compete with the best in the world in the field and also in the production of wool, fabric and design, but the truth is that we are not afraid to play any of these challenges. We are convinced that Uruguay has all the conditions to put that national 'claw' at the service of the country, of our history and identity," he concluded.

The "Lana Celeste a Catar" project is a joint work in which the Uruguayan Wool Secretariat (SUL), the National Institute of Agricultural Research (INIA), the Regional Innovation Consortium of Ultrafine Wool of Uruguay (CRILU) participate, the Uruguayan combing industry represented by the Cámara Mercantil, the Ministry of Livestock, Agriculture and Fisheries (MGAP), the Secretariat of Sports and the Uruguayan Football Association (AUF), with the support of Uruguay XXI, which is working to promote the Uruguay Wools brand worldwide.

Its long tradition in wool production, but also the diversification of its offer, the conquest of new markets and investments in new technologies have allowed Uruguay to be at the forefront in this sector of activity and to position itself in the world as a quality exporter.

Its knowledge and proven production experience have made the country an outstanding exporter in the wool market, placing it among the top five world exporters of wool tops, washed wool and dirty wool.

It currently supplies some of the most relevant and sophisticated global importers, such as China, the European Union and Japan, and reaches close to 40 markets in total.

The country stands out for producing excellent wool, internationally recognized for its origin and careful production process from genetics, breeding, shearing and conditioning coordinated at a national level. In addition, it offers skilled labor and a century-old tradition in this activity, which positions it as a reference in the world.

The Uruguayan industry has managed to develop different products for each of its customers' needs. Its designs with its own identity and adaptation to international fashion trends turn wool products designed and produced in Uruguay into luxury goods chosen by prominent celebrities and the most demanding markets.

The permanent investment in technology, machinery and genetics, as well as the continuous improvement of processes has allowed Uruguay to be at the forefront in this sector, increase its productivity and diversify its business lines.

A clear example of the added value that the sector offers in Uruguay is the adoption of traceability technologies, which make it possible to know the entire production process from the origin and reflect it on QR code labels that help in the final purchase decision and allow full confidence in this raw material.

In terms of sustainability and the environment, Uruguay is a very good example worldwide of responsible water collection and effluent treatment. It has incorporated ecological and animal welfare certifications. In fact, its processes are certified under European Union standards. In addition, the companies in the sector are involved in alternative energy projects, guaranteeing the use of renewable energies, have great technical specificity and highly qualified human resources and the best working conditions in the region.