On December 14, Uruguay XXI was invited to participate in the 2020 edition of the Export Effort distinctions an event organized by the Banco República (BROU) and the Unión de Exportadores del Uruguay (UEU).

As every year, a group of companies were recognized in the categories of major exporters in Uruguay - both general, sectorial and clients of the BROU - for their performance in the period October 2019 - September 2020.

At the request of Uruguay XXI, this year the Free Zone exporters were also distinguished.

This year, the export sector was again recognized in the service sector, with a distinction being made for professional services in architecture and engineering, ICTs and audiovisuals.

In addition, three special recognitions were granted to the main export destinations: China, Brazil and the United States. In turn, two "green" awards were given for their efforts in environmentally friendly production.

The ceremony was held at the Central House of Banco República, was transmitted virtually and the recording of it is available at this link. 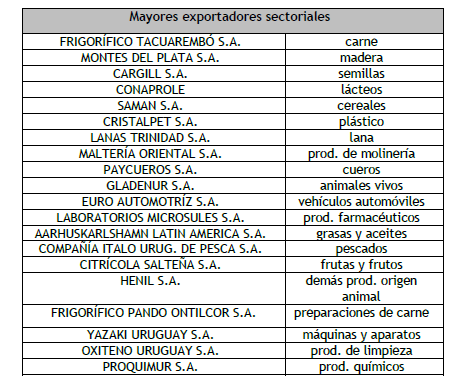