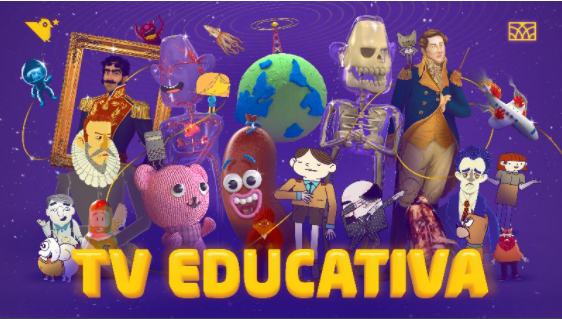 TV Educativa, written and directed by Pablo Marcovecchio and Marco Caltieri and produced by Clara Charlo, will be the first Uruguayan series to participate in the prestigious event.

The world premiere will be at the prestigious Canneseries festival in partnership with MipTV (Official Short Form Competition). It will be the only animated production in the competition, and together with Argentina Hell, the only two representatives from Latin America.

The production is entirely Uruguayan and was made possible thanks to the support of the Dirección Nacional de Telecomunicaciones (Dinatel) of the Ministry of Industry, Energy and Mining, Montevideo Audiovisual and the Instituto Nacional del Cine y el Audiovisual (INCAU).

TV Educativa is not an educational series, it is presented as if it were produced by the dictatorial government of a fictitious country (Ulandia), which has its own anthem, its own flag and each chapter begins with the speech of the Minister of Education of Ulandia.

It is a TV series self-conscious of its character as a television product, which plays at being an educational project through segments that organize knowledge by subjects. Each one of these uses a different animation technique and works in a separate world, with its own characters, who will dialogue from one sketch to another in the same episode, and who will grow episode by episode. Its narrative emulates the logic of television zapping within the same program.

The construction of the characters in each of the worlds takes place in an abrupt, fragmentary way. After their introduction, the episode jumps to another world, then to another, then to yet another, only to return to the first and resolve a conflict that was left open, or contradict what was said the last time the characters were seen.

It is a series that expresses criticism regarding education, stereotypes, mass culture. And about the idea that governments have about education and, above all, about television itself.