With support from Uruguay XXI and CAVI, a delegation of 26 developers will showcase the potential of this growing Uruguayan industry at the Game Developers Conference. The industry will also launch the promotional site www.uruguayvideogames.com.

Uruguay returns to the Game Developers Conference (GDC), the world's largest annual meeting of professional videogame developers, but for the first time it will do so in person with a country stand coordinated by Uruguay XXI and the Uruguayan Chamber of Videogame Developers (CAVI). Last year was the first time the country had an institutional presence at this event in San Francisco, California, but on that occasion the activity was carried out in virtual format.

The delegation, made up of 7 studios - in addition to institutional managers who will support the management and represent 11 other projects that will have a virtual presence - will participate with the aim of capitalizing on knowledge, inspiring with the professional and creative work that Uruguayan studios develop and connecting with global industry referents and professionals to channel the sale of videogames and attract key investments for the sector in Uruguay.

In addition to the country booth, the delegation will have a virtual space provided by the conference, which will allow exhibiting the different Uruguayan projects as well as information related to the video game sector in the country. 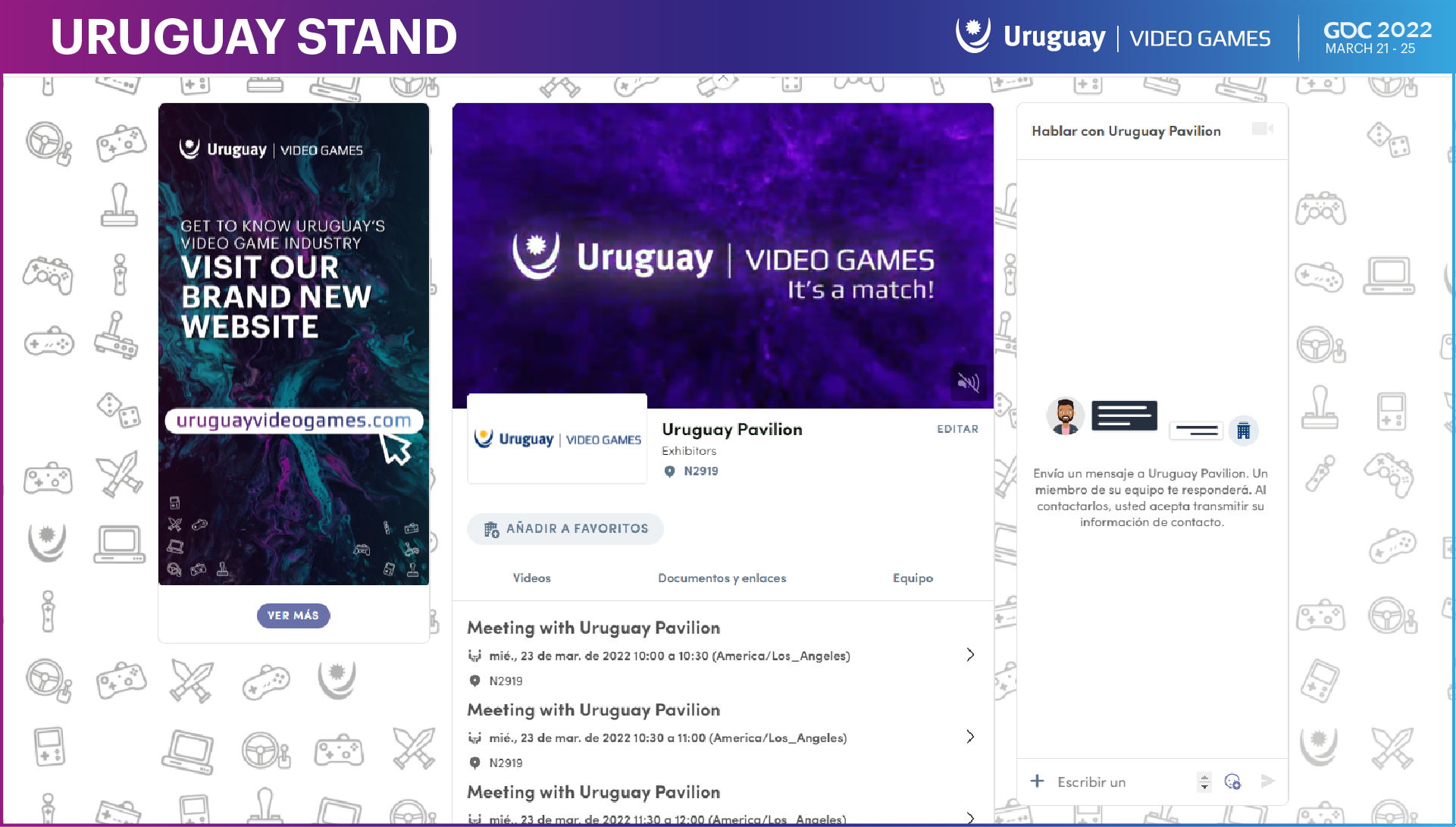 The GDC represents an opportunity for developers and industry professionals to showcase their projects and services, as well as the virtues that make Uruguay an outstanding ecosystem for the development of this industry.

Uruguay's participation in the GDC will be the framework for the launch of the website www.uruguayvideogames.com. This reference site brings together the entire local videogame sector on a platform that will allow access to information about Uruguayan studios and developers, as well as to visualize their projects in development and launching stages. The purpose of this tool is to promote the sector in foreign markets and facilitate the generation of business and investment for local developments. The page is presented 100% in English and is designed to strengthen international ties.

Video games from Uruguay to the world

This joint effort by Uruguay XXI, CAVI and Uruguayan studios and developers aims to showcase the country's booming industry and demonstrate that in addition to its innovative profile, it offers a perfect alliance between creativity and qualified talent to develop the best video games for mobile platforms, PC or consoles.

The industry in Uruguay -which was the first country in Latin America to offer university degrees for professionals in the sector- is characterized by being a collaborative community, with important events such as Level UY, a 100% local production that promotes culture and development opportunities both in Uruguay and in the region, and which in 2021 completed its fifth edition.

Uruguay has earned a place at the international level thanks to the success of several video games that have topped the rankings of app stores and achieved visibility on the best platforms in the world.

Other international awards include "best game in Latin America" for the Kingdom Rush and Iron Marines sagas by Ironhide Game Studio at the Brazilian BIG festival, with more than 10 million downloads.

The success of this industry in Uruguay is also confirmed by its growth - from 2013 to 2020 the number of companies increased 100% - and the several million downloads of games created in the country. This ecosystem has attracted foreign companies such as Argentina's Etermax and Globant, or the U.S. company Jam City, which chose the country as the center of their operations due to the significant advantages it offers for doing business in Latin America and the world.