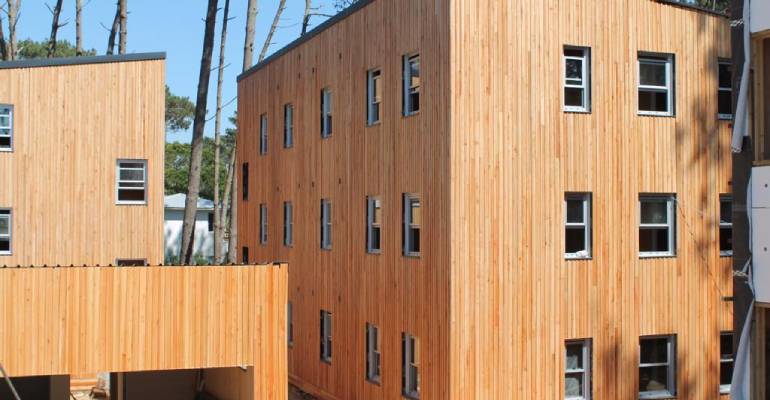 The dynamic undertaking in the forestry and wood sector belongs to VIK, the international hotel chain, and was carried out by the Enkel Group study.

Faced with the scarcity of forest lands of this type in other regions of the world, and thanks to its favorable business climate, great social stability and fiscal incentives for investors, Uruguay managed to attract significant foreign investments that have energized this sector of the economy, doubling its value in just five years.

An example of this is the three-level building with CLT (laminated wood) structure that the international hotel chain VIK built in José Ignacio, one of the most exclusive spas on Uruguay's east coast. This building, which was completed at the beginning of December, is also the first building of its kind in South America.

Enkel Group, an architectural, construction and importing firm, was the Uruguayan company in charge of carrying out this undertaking that reaches approximately 1,800 square meters, used 504 cubic meters of wood and captured 580 tons of CO2, which is equivalent to removing 122 vehicles from the Uruguayan vehicle fleet during the period of one year.

"In recent times the need to access construction systems that generate more competitiveness was born. In this search, and with the spirit of going hand in hand with the world and with sustainability in construction, we found in the CLT an incomparable solution," explained Matías Abergo, CEO of the construction group.

The technical director of the group, the architect Juan Gutiérrez indicated that Vik, his client, wanted to build this work with a wooden structure and had very short execution time. The firm, which is already installed in Punta del Este with three first-rate hotels, decided to continue investing in the country and added a new hotel niche that completes its business pool. The new building has three qualities of rooms with a freer concept than the traditional hotel, as it offers a part of hostel, hotel and bungalows.

"This wood construction has many environmental advantages, but also industrialization and construction processes, such as speed and quality control. It's a favorable system from every point of view, because of its quality, economic level, ecological issues and a time issue," Gutiérrez said.

The structure is developed in six buildings: three of three floors, one of two and one of one. The first wooden panel was laid on May 24 and construction was completed in early December.

According to Abergo, this project will allow the sector to continue dynamizing and will open doors to new projects that can be carried out in Uruguay or from Uruguay to the world. "We are going that way. We are about to close three or four projects for next year, and the idea is to generate a plant to produce with local wood and that the execution of these projects go hand in hand with being able to use local raw material to give added value," he said.

Gutiérrez also said that the building has generated great interest, both from academia and private. "Wood is the engineering product with the highest technology applied in the world and currently we have in the country a fabulous production of wood that is being underused," he said.

Indeed, Uruguay has a strategic location for the development of this activity and has multiplied by thirty the area planted in the last 25 years. Meanwhile, the area of soils declared a forest priority corresponds to 24% of the total agricultural area of the country.

Uruguay is also located at the same latitude as the world's main forestry enterprises, such as Australia, New Zealand, Chile and South Africa. Its favorable natural conditions ensure very good levels of international competitiveness. Its temperate climate and evenly distributed rainfall throughout the year have benefited the wide availability of soils with high yields. Thus, the average growth of wood is six times greater than in the northern hemisphere, and in addition, almost all of its production has international certification.

To learn more about the characteristics of the forestry - timber sector in Uruguay, click here or read the report "Investment Opportunities in the Forest Sector".

Businessmen and investors of reference in the region highlight...
New Intelligence Report on Foreign Direct Investment in...
The new Global Services Report by Uruguay XXI was presented

Businessmen and investors of reference in the region highlight...
The new Global Services Report by Uruguay XXI was presented
Join the Catalog for International Buyers of Uruguay XXI