URUGUAY STRENGTHENS ITS RELATIONSHIP WITH THE UNITED ARAB EMIRATES

As part of Uruguay's mission to Dubai, a Business Forum was held with the participation of President Luis Lacalle Pou and the meeting "United Arab Emirates & Uruguay: gateways between the Middle East and Latin America", with presentations by the Minister of Economy and Finance and the Minister of Industry, Energy and Mining.

In a new day with a delegation of national authorities, the signing of the memorandum of understanding to expand economic cooperation and encourage, promote and facilitate effective cooperation in the areas of trade, industry and services took place between both countries, in the hands of the Dubai Chamber and the Chamber of Commerce and Services of Uruguay (CCSUY). 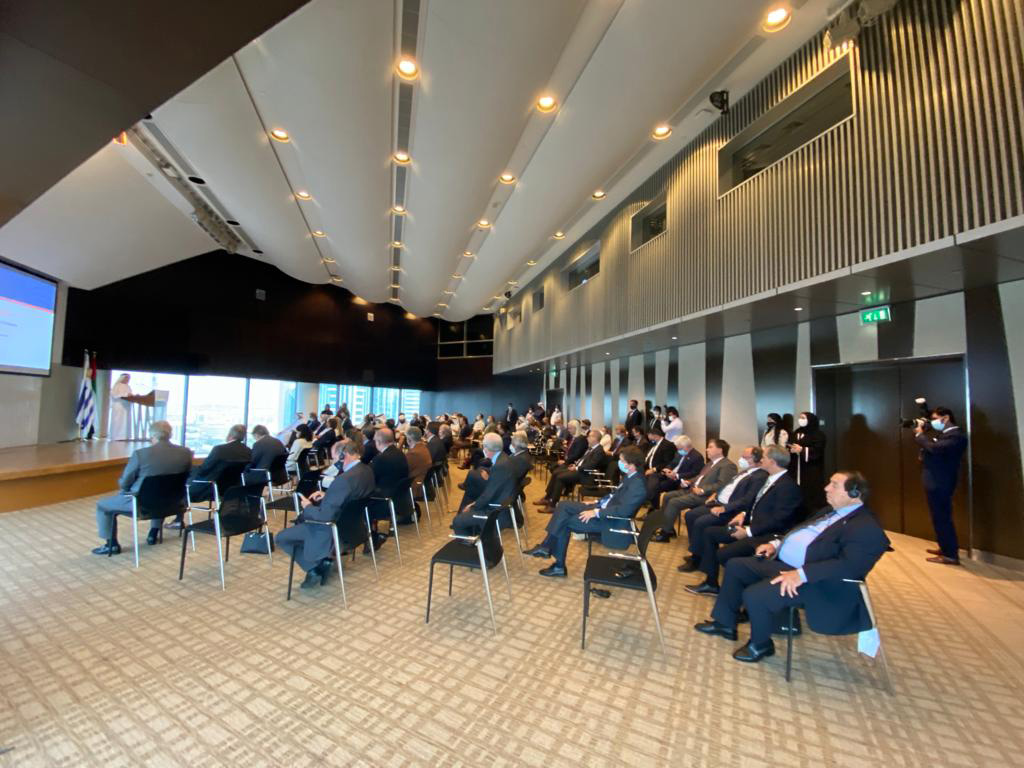 Under the terms of the agreement, the Dubai Chambers and CCSUY will align their efforts to facilitate and expand cooperation, trade and business between their respective members. The two entities will exchange information related to economic, commercial and industrial matters, including information on sectors of mutual interest, as well as business opportunities.

The strategic agreement was signed by Hamad Buamim, president and CEO of Dubai Chambers and Mr. Haroldo Espalter, board member of CCSUY, in the presence of representatives from both chambers of commerce. The signing was followed by the president of Uruguay, Dr. Luis Lacalle Pou. 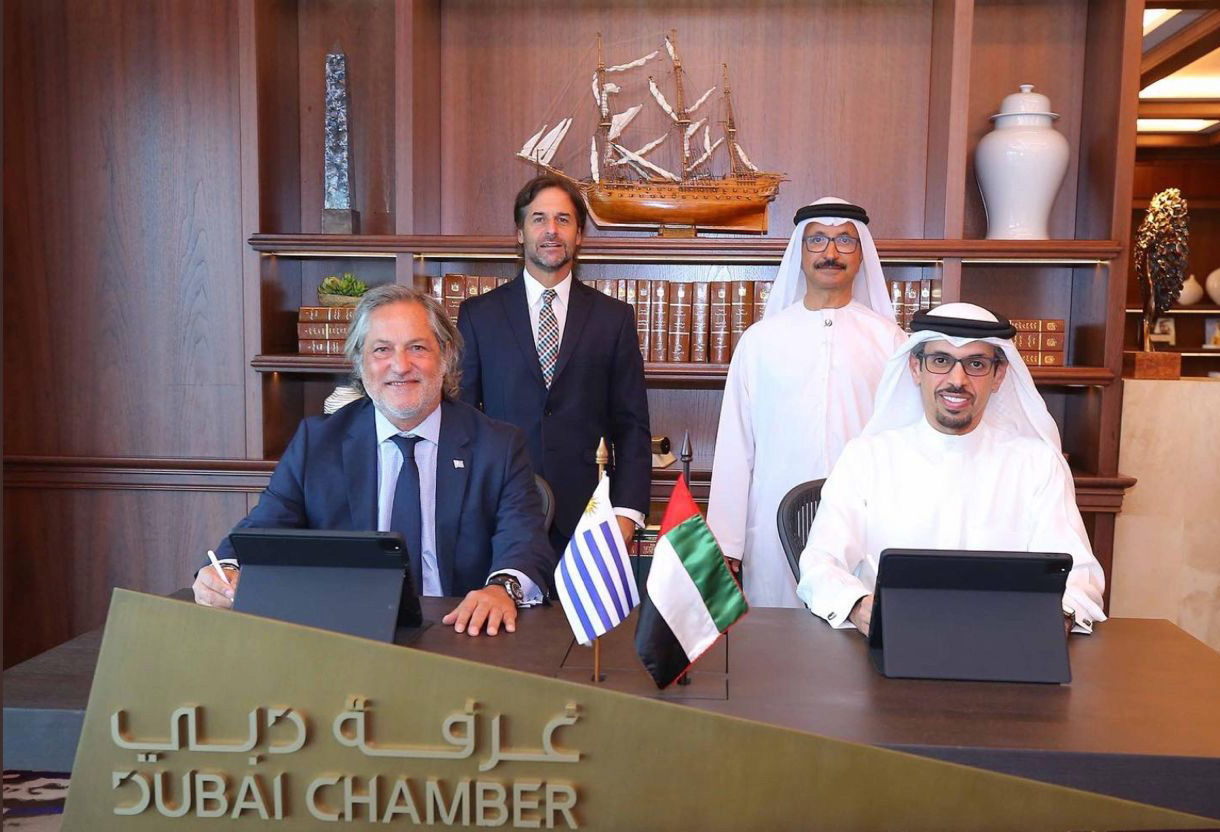 Dubai's non-oil trade with Uruguay reached $14.6 million in 2020, which represents the largest share of the UAE's trade with the Latin American country, revealed Buamim, who added that there is a large untapped trade potential from which Uruguayan companies and their UAE counterparts can benefit.

For his part, Haroldo Espalter, member of the board of directors of CCSUY, said that in this entity Emirati companies have an ally to explore, develop and successfully promote new business in the South American region.

The Uruguayan side reaffirmed its commitment to the Emirati institutions in the constant search and creation of opportunities for cooperation and exchange at the commercial, technological and investment levels between the two economies, which have a high potential and great complementarity between them, in terms of trade in goods and services.

Later in the day, the business forum "Emirates and Uruguay gateway to middle east and Latam" was held with welcoming remarks by the Executive Director of Uruguay XXI Sebastián Risso, followed by presentations by Minister Azucena Arbeleche and the Minister of Industry, Energy and Mining Omar Paganini. 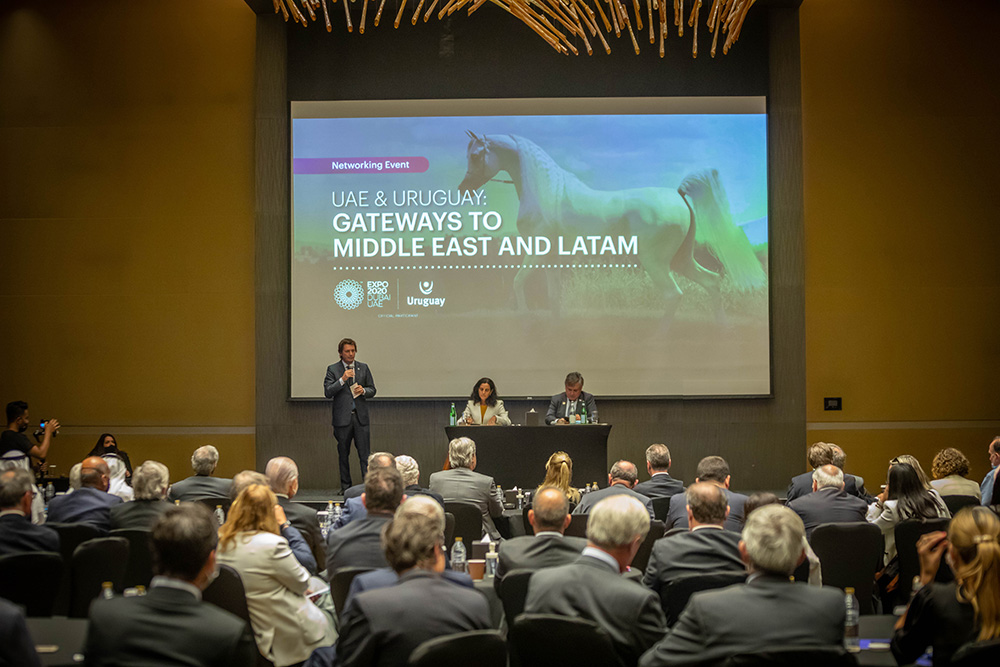 Also in attendance were the Minister of Foreign Affairs Amb. Francisco Bustillo, the Minister of Livestock, Agriculture and Fisheries, Agronomist Fernando Mattos, the Minister of Tourism, Tabaré Viera and the Ambassador of Uruguay to the United Arab Emirates, Mr. Álvaro Ceriani.

Also, companies accompanying and supporting this mission such as Bodega Garzón, the National Meat Institute (INAC), Conaprole, the Technological Laboratory of Uruguay (LATU), the National Institute of Viticulture (INAVI), ANTEL, the Eastern Republic of Uruguay Bank, UTE and the rice agro-industrial company, COOPAR. 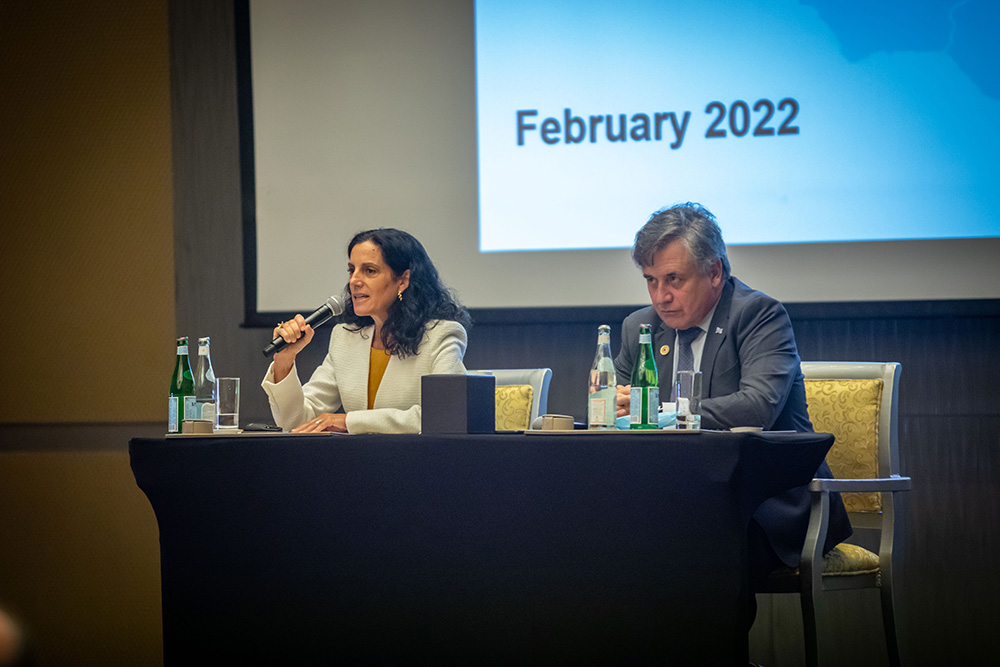 Arbeleche, who also chairs the Development Committee of the International Monetary Fund and the World Bank, spoke to an audience of Emirati businessmen, foreign authorities and representatives of the Uruguayan delegation.

In her presentation, the minister pointed out Uruguay as a place that is favorable for private investment and open to it.

"We have sufficient liquidity, we are very stable and we do not change policies," she said.

She pointed out that as a country, Uruguay is open to negotiate with all regions of the world, and she supported herself on its ESG (Environmental, Social and Governance) indicators, which refer to environmental (including climate change), social and governance indexes (such as control of corruption, respect for the rule of law or quality of democracy) and socially responsible investments. Also, its multiple logistical benefits, given that Uruguay has privileged maritime, air and land entry points and the only free ports in the region make it the best option for supplying the continent from there. 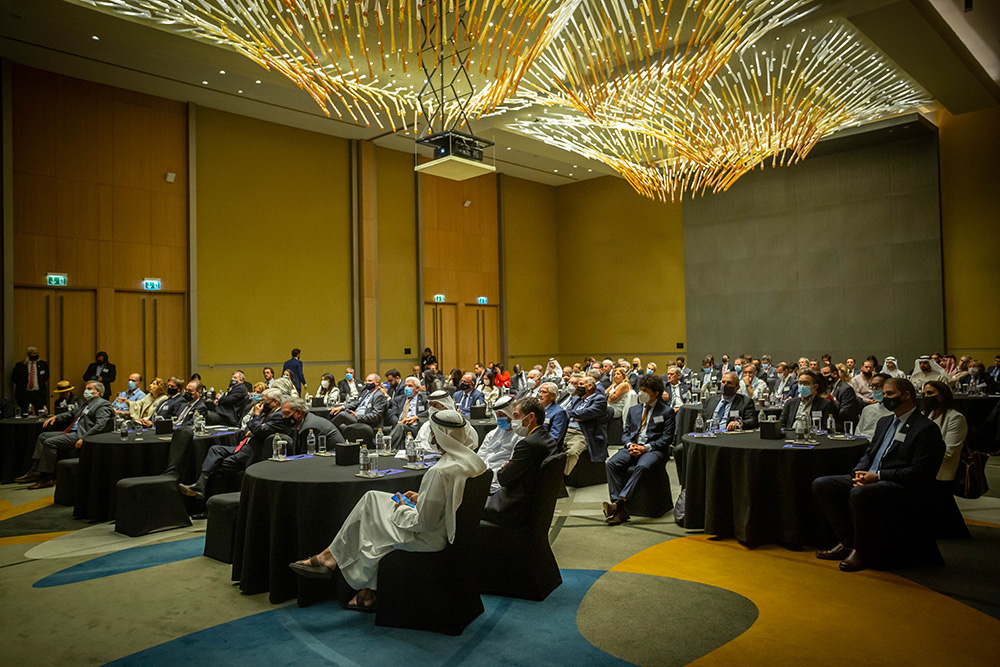 She also stressed the commitment of her secretariat and her role as chair of the IMF and WB Development Committee to incorporate environmental issues into economic policies.

For his part, the Minister of Industry, Energy and Mining, Omar Paganini, highlighted Uruguay's progress in the development of renewable energies, technology and audiovisual production. 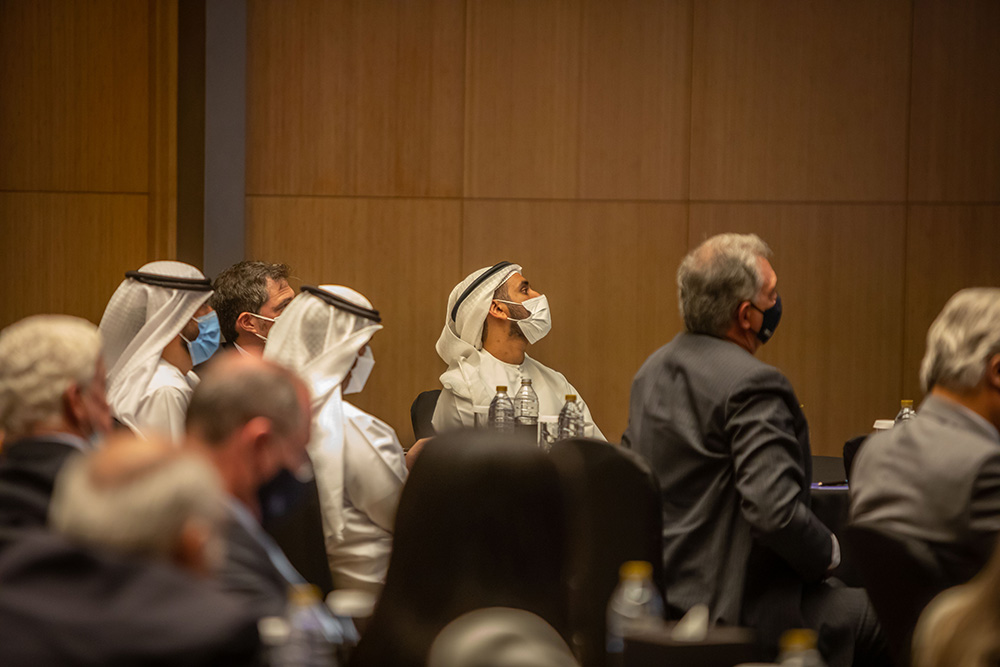 "Uruguay has been exporting software and IT services in general for more than 30 years," he stressed to those present and the international media.

He also highlighted the Ceibal Plan, under which every child has been given a laptop computer since 2007.

First-class audiovisual services, stability, tax exemptions, special programs and a reliable governmental framework are some of the advantages that Uruguay offers as a film marketplace.

In addition to the strength Uruguay enjoys in renewable energy, technology and mobility, it also included digital content industries as a way to grow exports.

"Uruguay has the traditional sectors that continue to grow, but I invite them to invest in innovation and new ideas" he concluded.

The networking event also included the presentation of national products included in the Sembrando Program, which seeks to support micro, small and medium-sized entrepreneurs in directing their goods and services to local and international markets. 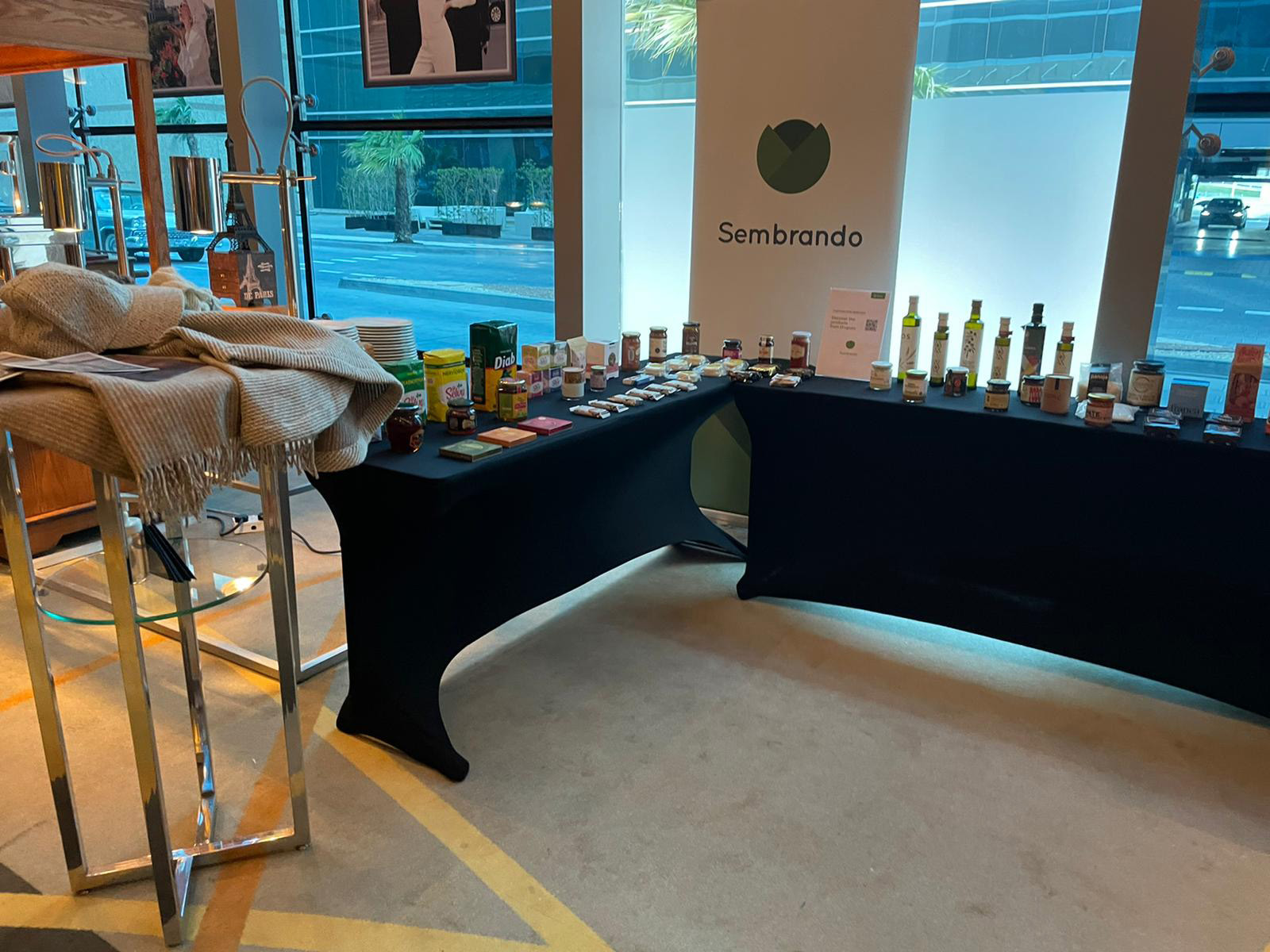 The day culminated with a reception hosted by HSBC Bank Middle East for local authorities and clients.