Hand in hand with Uruguay XXI, the country is positioned in China as a business center and producer of reliable food.

With the presence of the executive director of Uruguay XXI and curator of the fair, Antonio Carámbula, and the ambassador of Uruguay in China, Fernando Lugris, was held the inauguration of the Uruguayan country stand at Expo Beijing, the largest horticultural exhibition in Asia, located in the district of Yanqing, Beijing.

With this initiative the country will be exhibited as a business hub in South America and a reference in agrointelligent production, technologies and clean energy.

"We want to show China and the world that Uruguay is a leader in the production of reliable food, technology, renewable energy and tourism, and position it as a business center," said Carámbula.

The inauguration of the stand was on Tuesday, April 30 and also counted with the presence of international public and authorities.

Uruguay's proposal for visitors is "Meet life, meet Uruguay" and offers to get to know the country through an experience based on augmented reality technology, which allows to live agriculture, livestock, sports and culture closely.

Also present at the stand are the traditional Uruguayan amethysts, which have already captured the attention of Chinese visitors due to their large size. These stones from the north of the country are of international interest, both for the volume of their crystals and for their intense violet color, they can range from a few kilograms to more than 10 tons.

The horticultural fair will be open until 7 October and is organised under the theme "Live green, live better". It was created on an area of more than 500 hectares and awaits the arrival of 16 million Chinese citizens and tourists.

Carámbula informed about other authorities that will approach the exhibition. At the end of May, the director of the Office of Planning and Budget, Álvaro García, will do so, and in August, within the framework of the Uruguay Week in China, the Minister of Industry, Energy and Mining, Guillermo Moncecchi, will arrive. Public and private representatives from the Ministry of Livestock, Agriculture and Fisheries, and from the national meat and wine institutes will also attend.

Uruguay and China celebrate 60 years of parliamentary relations in 2019. In addition, in 2018, as part of the 30th anniversary of the re-establishment of diplomatic relations between the two countries, Uruguay was the first in Mercosur to sign a memorandum of understanding on the joint construction of the One Strip, One Route initiative.

In dialogue with Chinese media and on the occasion of his presence at the II Forum La Franja and La Ruta para la Cooperación Internacional, which culminated on Saturday, April 27, the Minister of Foreign Affairs, Rodolfo Nin Novoa said that this agreement was "a very important milestone" and represented a greater opening of relations between the two countries.

The Chancellor recalled that China is Uruguay's main trading partner and further elaborated on the possibilities and guarantees that Uruguay offers due to its strategic position, its free ports and airports, the growing economy and the politically stable society.

As part of his participation in this instance, Nin Novoa also met with his counterpart Wang Yi, with the director of the General Customs Administration of that country, Ni Yuefeng, with whom he signed a facilitation agreement, and with authorities of the Chinese Aviation Administration. 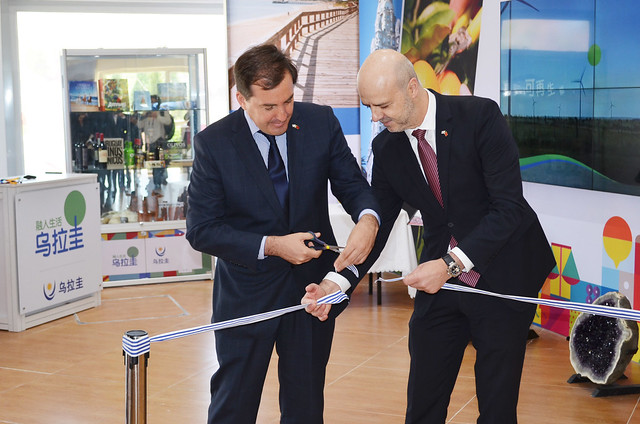 Uruguay XXI inaugurates +COMERCIO workshop series for companies...
For the first time Uruguay will have a country stand at...
Official delegation completes its agenda at Expo Dubai